At the core of strategic management, a firm’s goal is about gaining and sustaining a competitive advantage. At a corporate level, the two main strategic orientations of companies were defined as cost leadership or differentiation by Michael Porter back in the 1980s. Yet, competitive analysis has become ever more complex because of industry-specific particularities and convergence or concentration processes. In today’s aviation world, we see airlines venturing into new strategic positions including additional production platforms within their corporation. A convergence or so-called “hybridization” of business models becomes visible, i.e. the establishment of a low-cost subsidiary within the corporation of a differentiated flag carrier or characteristics from network carriers which are integrated in a low-cost airlines’ business model. Traditionally, legacy carriers have served a global route network focusing on premium customers. The following graph, however, illustrates the Singapore Airlines group carriers (as of July 2017) in a matrix defined by premium vs. low-cost segment and short-haul vs. long-haul operations. 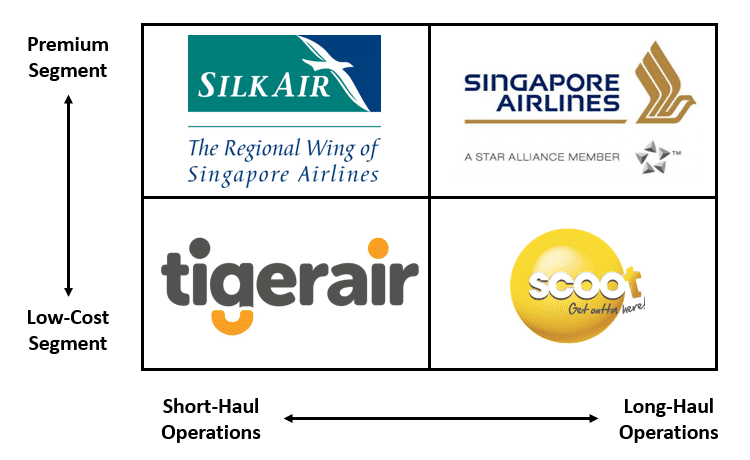 This paper highlights airline-specific challenges which need to be addressed when airlines “go hybrid”, i.e. exit their strategic position and try to integrate characteristics of the opposite business model. It remains to be understood why current airline strategies tend to hybridize and how (or if at all) airlines can hybridize their strategy without “getting stuck in the middle”, i.e. losing their competitive advantage.

We have identified the ongoing cut-throat hyper-competition within the industry due to liberalization of the aviation market and falling yields, 5,7% net margin of all airlines globally as the main drivers of strategic shift (Statista 2018). Therefore, flag carriers are pressured to lower their total cost to remain competitive against their low-cost rivals and those in turn are pressured to offer more differentiated service. According to Airbus (2018) full-service carriers were only able to reduce their overall unit cost by 2.6 % from 1980-2010, yet ongoing cost reductions are about to be tackled.

In the following, challenges associated with a hybridization of business model are illustrated and grouped into operational, financial, internal, and external aspects.

In order to produce a differentiated flight event, operational excellence in aviation is required at all levels of the value chain. In this case, we see the largest issues with a convergence of business models in flight planning and staffing.

The establishment of a hub-and-spoke network is a yearlong process, grown through business partnerships, internal strategy and interest of third parties (e.g. airports as infrastructure providers).

As to low-cost carriers, their business model strategically relies on simplicity. A bundling of traffic will heavily impact operations and complicate connecting processes for passengers and their luggage alike.

On a long-term scale we have doubts whether additional revenue through newly acquired customers (i.e. business passengers) can offset these complexity issue. Further, trends among network carriers include a (partial) decentralization of their network. Recent examples include LOT Polish Airlines in Budapest or AirBaltic along capitals in the Baltic states. Thereby, network airlines knowingly decrease economies of scale, since their resources are distributed across various bundle points. Additionally, a cannibalization on certain routes is a common burden once a full-service airline establishes a low-cost subsidiary. This becomes visible within Germany where a large airline conglomerate serves six domestic destinations in direct competition to its parent.

The aforementioned complexity in operations causes cost. Therefore, financial burdens in different spheres are a consequence of operational complexity. Yet, financial challenges have to be anticipated in greater effect for the LCC to hybridize. The trend of some low-costers to go long-haul imposes vast operational challenge such as positioning of flights or overnight stops, coherent with an immense investment to establish hub operations. Full-service carriers on the other hand need to outweigh the financial gap of opportunity cost lost when giving up market share versus not establishing a low-cost subsidiary, which potentially defends against rivaling LCCs in the home market.

Internal issues refer to staff, training, and corporate identity. These internal challenges arise from the inherent differences of airline business models regarding their operational basics. For instance, direct gate boarding (desired for FSNC) might be at the core of every station manager’s idea of service, yet innately wrong from a cost-leader position. Along similar lines, the service activities of cabin crew members have to be taken into consideration. Confusion might be created in the delivery of service and coherent rules to service level, such as greeting elite fliers by name or a second drink service on medium-haul flights. In addition, from an internal (structural) point of view, hierarchies can be differing in LCCs and FSNC. Similarly, compensation schemes will differ leading to dissonances, resistance or even possible legal (pay) issues in collective labor agreements.

Especially full-service airlines have to bear in mind the possibility of a heavy negative impact on their company image if they hybridize their strategy. In fact, this seems to be a common pitfall for airlines when they establish a low-cost subsidiary. According to the annual brand finance report on airlines (2018), 16 out of the top 20 airlines are full-service carriers based on brand value. Therefore, an important internal resource pertains to the fact that legacy airlines often have a strong brand, differentiating themselves by offering a higher level of service compared to low-cost airlines. However, current developments are to reduce cost by lowering the level of service and not differentiating their quality. Further, this results in the dilemma of legacy carriers not being able to grant former service features together with the issue of pricing seats once the add on value of service is not sensible for customers. Here it is essential to clearly position the corporation through a stringent marketing / PR strategy.

We at UNEX see the need for both legacy and low-cost carriers to try out new strategic scopes due to hypercompetition in the industry. However, the above-listed categories highlight the largest risks to consider and management challenges to anticipate. The highest risk for LCCs hybridizing is found in financial burdens and more complex operations. Internal aspects generally have a high necessity to be adjusted. The highest risk for FSNCs is associated with a potential deterioration of their brand image. We regard a clear separation of business units as the core aspect once conglomerates hybridize through subsidiaries. A good example in this respect is the Singapore Airlines group. SQ – the legacy carrier – has established a luxury, premium product on long-haul flights, while Scoot offers ultra-low-cost and hardly any service even on a 12h flight. Secondly, the clear differentiation in branding – not only in the name – has been recognized as extremely powerful in their strategy, i.e. instead of naming it “Singapore Light”, “Scoot” has been successfully chosen. The IAG group has managed to generate a 3,2 Billion € profit in 2018 to name another good example of a hybridized conglomerate. We see reasons for this success mainly in their clearly distinct operational structure. Having five inherently different carriers in their portfolio, route services vary with little fear of cannibalization. They make use of a good mix of socio-economic factors, i.e. a network set up to cater to ethnic traffic among other things. In this hybrid arrangement, British Airways dominates the traffic from Europe via London to Canada and the United States (over 30 cities directly served, compared to only five Iberian destinations in those countries). In contrast, Iberia traditionally serves a vast number of destinations in Latin American countries – eleven in total compared to British Airways with only six direct cities served in Central and South America (except the Caribbean).

To conclude, we at UNEX only regard an LCC / FSNC as such; once elements in operational, commercial and internal spheres are according to the business model. The strategy has to be aligned with the firm’s targets and has to deliver a substantial add on. Hence, the topic of hybridization is very complex and naturally plays into all strategic aspects. Airlines are therefore advised not to become Jack of all traits. Moreover, a damaged brand image, cannibalization, or an immense increase in financial burdens can undermine one`s competitive advantage and eventually lead to market exit since the firm’s strategy becomes irrelevant.

This site is using cookies to improve the customers experience: Find out more.
Go to Top